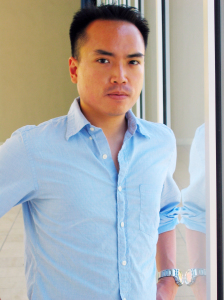 Michael served as a writer/producer on SYFY’s NIGHTFLYERS and NBC’s GRIMM; he has sold pilots to NBC/Universal Cable Productions, FreeForm, and Warner Brothers Television.

Michael’s features are ALWAYS BE MY MAYBE written with Ali Wong and Randall Park, and PLEASE STAND BY, starring Dakota Fanning, Toni Collette, and Alice Eve.

He is currently developing new feature projects for Warner Brothers Pictures and for Netflix.

As a playwright, his plays have been produced at NYC’s Second Stage Theatre, Chicago’s Victory Gardens, The Geffen Playhouse, Actors Theatre of Louisville, The Guthrie, LA’s Colony Theater, and many others around the country and internationally.

His plays include BUILD, YEAR ZERO, and COWBOY VERSUS SAMURAI. Year Zero was the Grand Prize winner of Chicago Dramatists’ Many Voices Project and was nominated for a Jeff Award for Best New Work. Michael was also one of the writers on Actors Theatre of Louisville’s Anthology Project (“Oh, Gastronomy!”) for the 2012 Humana Festival of New Plays. BUILD world premiered at LA’s Geffen Playhouse.

Michael is an alumni of New Dramatists and a recipient of a Helen Merrill Award. His work can be found in print by Samuel French.

He has been awarded new play commissions from Second Stage, South Coast Rep, and the Geffen Playhouse.